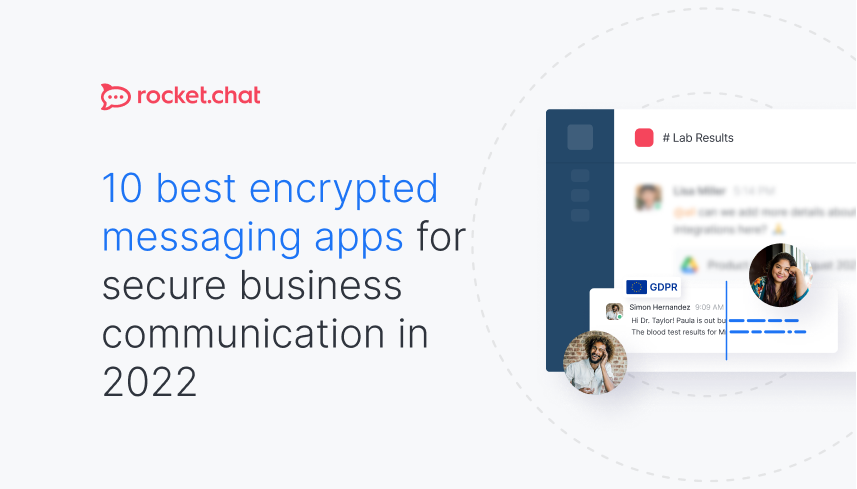 Many people are looking for encrypted messaging apps to securely communicate with their coworkers, friends, and family. While there are other ways to protect your data, end-to-end encryption has become a standard security feature in both consumer and business messaging apps.

For businesses, encrypted chat is where secure collaboration begins. For many organizations, secure business chat software is detrimental to doing business. Customers expect their data to be safe with organizations they choose to work with, and compromising on data security could mean irreparable damages to business reputation.

That's why encrypted messaging apps are no longer a rarity - not even for consumer-oriented communication. Privacy-conscious businesses go a few steps beyond encryption to ensure secure communication with clients or between their employees.

🗝️ Read on to find out what are the best encrypted messaging apps today, how encryption works, and how else you can ensure highest security standards while texting.

What are encrypted messaging apps?

As their name says, encrypted messaging apps are solutions that support the transmission of encrypted data. Encryption ensures that the only parties that can access the message content are the ones that hold the decryption keys – usually the sender and the receiver.

Moreover, the need for secure collaboration and encrypted messaging apps only increased with the abrupt adoption of hybrid work policies. As businesses moved toward remote work models, they also noticed rising cyber attacks and increased risk of cybersecurity breaches.

More than 50% of IT leaders say that mitigating cybersecurity risks is their priority when it comes to digital transformation. One of the ways to mitigate those risks is to adopt and use encrypted chat apps. Nowadays, such secure business chat software is a norm in digital workplaces around the world.

As mentioned above, encrypted messaging is the minimum that security-conscious businesses need to consider when purchasing a new messaging solution. Extremely secure collaboration tools also incorporate features such as multi-factor authentication and on-premise deployment.

‍Here are our top five secure instant messaging apps for businesses in 2022.

🗝️ Before you start, also check out our ultimate list of most secure messaging apps to compare their functionalities.

Besides being end-to-end encrypted, Rocket.Chat offers other numerous security features. First of all, Rocket.Chat is an open-sourced messaging platform with more than 30k GitHub community members that actively contribute to its safety, and it is considered one of the best Slack open source alternatives on the market.

Moreover, Rocket.Chat offers on-premise hosting, which means that companies can 100% own their data and minimize risk of security breaches. In other words, this allows the maximum endpoint security which is not covered by end-to-end encryption.

As one of the most secure encrypted messaging apps for businesses, Rocket.Chat is ISO 27001 certified and can be customized to comply with HIPAA, GDPR, CCPA, and other data privacy regulations.

NetSfere is an enterprise-grade communication solution that focuses on three things – security, encryption, and enterprise control. Their industry standard 256-bit encryption protects data and maintains the privacy of employee communications.

This app is more than an encrypted chat - it's a well-rounded secure business software that also incorporates video conferencing.

TeleMessage is a secure business chat software that ensures all the information that employees exchange is protected. Besides encryption, TeleMessage supports self-destruction of messages and remote data locking and wiping. It's also used for mass messaging, and enables capture, archiving and monitoring of SMS, MMS, voice calls, WhatsApp, and WeChat messages.

Troop Messenger is a well-known encrypted messaging app meant for businesses. It features instant messaging, audio and video calling, screen sharing, and more. Its integrations allow employees to seamlessly collaborate with one another. Moreover, the possibility to host on-premises allow Troop Messenger’s customers to have full data sovereignty. It's often mentioned as a security-oriented Slack competitor.

Besides being an encrypted messaging app, Element is also open-sourced. Element’s security portfolio is strengthened by Matrix protocol, allowing a vibrant developer ecosystem that allows advanced collaboration. Element’s strong points – security and privacy – are its customers’ priority, so on-prem hosting and full data sovereignty are also a part of their offer.

Encrypted messaging apps became more popular when WhatsApp implemented end-to-end encryption. From then on, we’ve seen multiple apps entering the secure instant messaging market. Without a doubt, WhatsApp remains the most popular consumer messaging app. However, due to sharing data with Facebook, WhatsApp is not considered 100% private and secure.

Here are the best encrypted messaging apps for personal use that adhere to strict data protection standards:

Signal is probably the most famous messaging app for those that want their privacy kept private. With internationally renowned security technologists as its ambassadors, Signal keeps its reputation as one of the best encrypted messaging apps out there.

This Swiss-made encrypted chat app is so secure it doesn’t even require you to enter your email address or phone number to use it. Threema also permanently deletes messages after it is delivered, so there can be no misuse of the data and metadata.

Telegram is an encrypted messaging app that is popular in countries such as Brazil, Russia, and Malaysia. It is popular for offering bug bounty – a $300,000 prize for anybody that detects vulnerabilities in their code. Also, part of Telegram’s business model is refusal to sell customer data, so it is known as one of the safest messaging apps.

Another Swiss-made encrypted messaging app, Wire is completely GDPR compliant and requires only email to download. Wire’s officials also say they are not interested in selling data to third parties, and its code is open-sourced.

Coming from a larger Wickr family, Wickr Me is an secure business chat software designed by security experts. One of its most interesting features – besides stripping metadata from content – is detecting screenshots taken by the receiver of your message.

As their name says, encrypted messaging apps use the process of encoding information to prevent anybody viewing the content of them. As data privacy is becoming an increasingly important topic, end-to-end encryption became known as a standard data protection protocol.

However, end-to-end encryption does not equal data privacy and protection. Yes, it does prevent the message from being read if intercepted, but encrypted messaging apps ensure that messages are encrypted only in transit.

What does that mean? This means that the provider of the service can still access the data and read the data – unless they say they don’t. Some encrypted messaging apps explicitly say they don’t store data nor metadata on their servers, or sell them to third parties.

🗝️ Check out how some messaging apps could be exposing conversations.

Moreover, encrypted messaging apps cannot guarantee data protection if endpoints are compromised. This is why there are many new technologies and initiatives aimed at increasing endpoint security.

In any case, encrypted messaging apps are becoming the standard when it comes to safe communication. Communication industry is the leader when it comes to using encryption, but 60% of employees say their organizations transfer confidential data to the cloud whether or not it is encrypted.

However, messaging apps meant for businesses need additional safety measures and protocols to ensure security of their – and their customers’ – data.

Is your business chat software secure enough? Look for these features.

End-to-end encryption is an important security feature of messaging apps, but it’s surely not the only one. If they’re privacy-conscious or operate in highly-regulated industries - like government & defense, healthcare, or education - businesses will want to fortify the security of their communications with these features:

Certificates like ISO 27001 are internationally recognized standards for information security management systems. Such certificates prove that the encrypted messaging apps are audited on annual basis by independent third-party auditors.

Push notifications can be tricky and reveal confidential information. To many organizations out there, it’s important to have an ID-only push notifications feature in addition to end-to-end encryption of their messaging apps.

Depending on the region or industry, businesses might need to comply with data privacy regulations such as GDPR or HIPAA. Encrypted messaging apps partly comply with such regulations merely because of data encryption. However, there are several other customization options that the app admins need to configure to be fully compliant.

Using open source technology is considered to be a great way to enhance overall security. Namely, open source software is upgraded according to its community members’ feedback on a frequent basis - also meaning stronger security.

For organizations like governmental agencies, on-premise deployment is often a requirement, just as it is for other businesses in highly regulated industries.

Encrypted chat is a prerequisite for secure collaboration. Although encryption does not equal data protection, it is one of the most important features when it comes to messaging security.

These are just some of the reasons to get an encrypted messaging app – for private use or for your business.

1. Unlock the power of team communication and collaboration

With a secure encrypted chat app, business leaders can unlock the power of effective team communication and collaboration. Team collaboration leads to better innovation practices, better company culture, and increased productivity. According to research, collaborative businesses are also more likely to be profitable.

Did you know that in 2019, 52% of Americans opted out of using products or services because of privacy concerns? This speaks volumes about the necessity of encrypted messaging apps. Encryption is the minimum you simply can’t afford to neglect!

When a cybersecurity breach happens, businesses are deemed as less trustworthy. Why should you care? Because data privacy and security is becoming a reason for consumers to purchase a product. According to research, 54% of companies are using encryption to protect their customers’ personal information.

In industries such as healthcare or financial services, there are laws and regulations that businesses must adhere to when it comes to customers’ data privacy. Not complying with those regulations can be costly – for example, there were $63 million worth of fines issued in the first year of GDPR policy in the EU.

Moreover, cybersecurity breaches that can happen due to insecure communication between employees can also turn out to be costly. This IBM report says that the average cost of a data breach in the US is $3.8 million.

🗝️ All in all, encrypted messaging apps can save businesses a lot of time and money. However, encryption is not the only safety protocol that businesses need to employ. Check out this list of messaging apps’ security features you should look for to ensure data security.

Here at Rocket.Chat, we are committed to data protection and security. This is why even cybersecurity companies choose Rocket.Chat as their internal messaging solution.

As Rocket.Chat is one of the most secure messaging apps for businesses, we adhere to the strictest messaging security standards. Not only that – we actively upgrade our own practices internally and with the help of our open source community.

Get in touch with our team and check out how you can provide the best collaboration experience to your employees without ever worrying about security.

Sara is an SEO Strategist at Rocket.Chat. She is passionate about topics around digital transformation, workplace experience, open source, and data privacy and security.
Sara Ana Cemazar
Related Article:
Team collaboration: 5 reasons to improve it and 6 ways to master it
Ensure secure business communication
Get our eBook on twelve security features to look for in your next business communication platform. 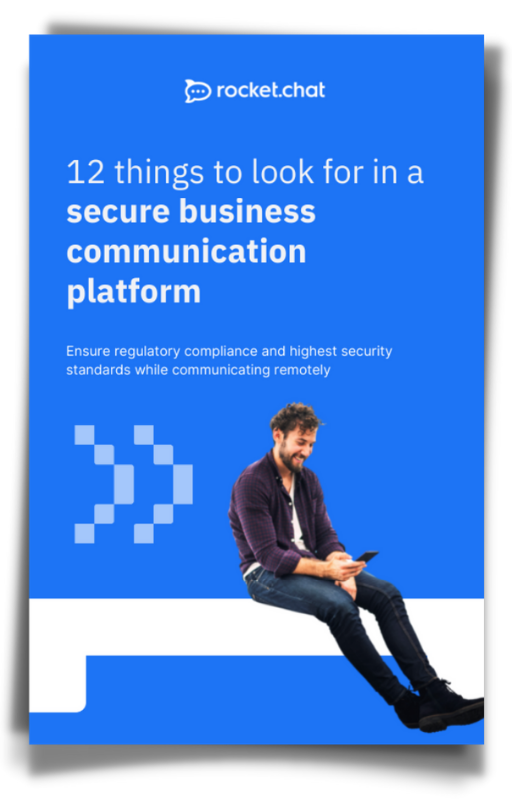 6 best chat apps according to developers